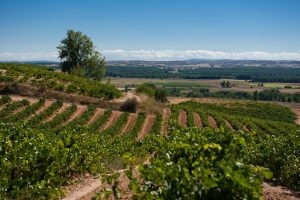 Located in the heart of Spain in the ancient realm of Castile and León, Ribera del Duero has been a center of wine production for thousands of years. Today, Ribera del Duero remains one of the most important wine regions in Spain, as it is the spiritual home of Tempranillo, Spain’s most venerable red grape variety and the source of many of Spain’s greatest wines. Here the iconic Tempranillo, also known locally as Tinto Fino and Tinta del País, reaches its pinnacle and demonstrates to the world its inherent virtue.

Ribera del Duero occupies the hills and high meseta to the northeast of the city of Valladolid and stretches out along the Duero River, Spain’s most beloved waterway. Not surprisingly, the region draws its name from the venerable Duero that plays an important role in the region’s terroir. It seems that the soil of Ribera del Duero bears more than a passing resemblance to that of France’s Burgundy, with a wide range of chalk, clay, marl and gravel, combined together in varying degrees of prominence. However, whereas Burgundy’s soil complexity results from plate tectonics, the soil in Ribera del Duero results from the Duero’s erosion through the sedimentary layers of the Castilian meseta. The Duero River may likely play a role as well in moderating the rather harsh continental climate of the region, an area known for its dry, hot summers and cold winters. Add altitude (2,500-3,300 feet) and the intense luminosity of the Spanish meseta to the region’s exemplary terroir, and it becomes apparent that Ribera del Duero possesses all the attributes needed to showcase the beauty of Spain’s quintessential grape variety.