With the holidays in full swing, we here at The International Wine of the Month Club™ decided to pull out our stash of wine corks (we tend to have quite a few by the end of the year) and make some Christmas tree ornaments. With a little imagination, some crafting supplies, and help from some of our kids, we were able to make quite a few fun and unique tree ornaments!

Here are our 20 favorite Christmas tree wine cork ornaments, as well as a few that the kids made for us:

A big thank you to our helpers Lizzy and Emily! 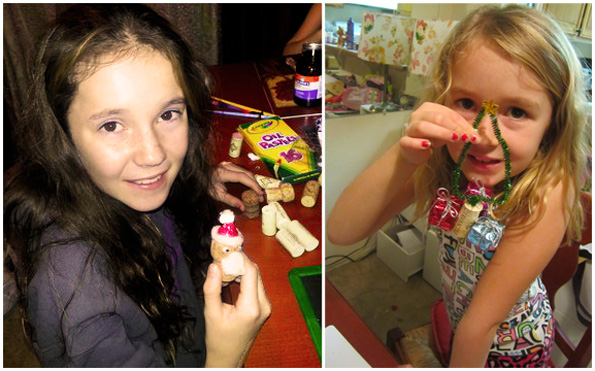 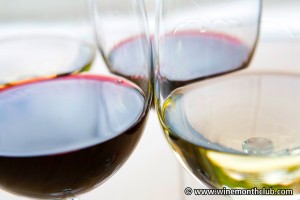 Despite centuries of producing some of the world’s most sought after wines, most notably Port and Madeira, the trove of excellent unfortified Portuguese red and white wines remains relatively undiscovered on this side of the Atlantic. True, Portuguese rosés enjoyed a good run in the late 1960s and 1970s, and the present penchant for Vinho Verde seems to have established some credibility as a fun summertime wine, but neither rosé nor Vinho Verde truly represent the breadth of fine red and white Portuguese wines. Affordable, food friendly, and full of flavor, there is much to discover in this new age of oenological exploration, beginning in the north of Portugal in the valley of the Douro and extending south to Dão, Alentejo, Lisboa, and the Algarve. All produce many contemporary and traditional red and white wines of quality and individuality.

Moving south one discovers a plethora of small estates in Portugal’s Dão that continue to push the envelope in terms of quality and style with traditional Portuguese grape varieties: Touriga Nacional, Touriga Franca, Jaen, and Encruzado to name a few. Taboadella’s red wines are smooth and flavorful, while the estate’s Encruzado Reserva is a white wine that is every bit the equal of fine white Burgundy. Owned by the Amorim family who gained fame as cork purveyors, Taboadella is an ancient property that has emerged as a cutting edge producer in all respects.

The wine country around Lisbon is enjoying a renaissance, too, with such purveyors as San Sebastião turning out a wealth of tasty and affordable wines from traditional and international grape varieties. Moving further down the Iberian Peninsula, Alentejo, deep in the heart of Portugal and off the beaten tourist track, is home to the highly acclaimed Herdade Aldeia de Cima estate among others. And then there is the Algarve, home to a growing number of little viticultural jewels as well as fabulous beaches, caves, and nightlife. Isn’t it time to discover the splendid wines of sunny Portugal? Enjoy! 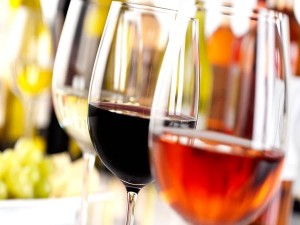 “What’s a great summertime wine”? The answer really depends on many factors, but in an ideal world it would be the wine in your glass and mine. That’s at least the way it should be, but how to find the best summertime wines rests on personal preference, accompaniments, companions, and of course the temperature at which the wine is consumed, to mention just a few variables.

For summertime wines, white wine and rosé come to most people’s minds by default, with Chardonnay still front and center simply because it remains the planet’s most ubiquitous white varietal, but there are so many other great summertime wines from which to choose. Sauvignon Blanc with its crisp herbal edge and refreshing acidity gets two thumbs up, and there is a lot more to Sauvignon Blanc than New Zealand’s grapefruit bombs. Chile and South Africa turn out splendid Sauvignon Blancs in a myriad of styles. France, the home of Sauvignon Blanc, also fashions wonderful white wines. Sancerre and the Loire Valley are notable for their Sauvignon Blancs, while Bordeaux offers a dizzying array of pleasurable summertime drinking with white wines, from 100% Sauvignon Blanc to blends containing Semillon, Sauvignon Blanc, Sauvignon Gris and Muscadelle. Chenin Blanc also deserves serious consideration as a summertime favorite. Vouvray Sec, the quintessential dry Chenin Blanc from France’s Loire Valley, makes a wonderful warm weather companion. Racauderie Gautier and Vigneau-Chevreau are two reliable high quality Vouvray producers, though South Africa also fashions first rate Chenin Blanc. All are delicious with a moderate chill.

Increasingly, my go to summertime wines include beautiful crisp Italian white wines such as the 3 V’s: Verdicchio, Vermentino, and Vernaccia di San Gimignano. Colpaola’s Verdicchio di Matelica, Le Colonne’s Vermentino Costa Toscana, and Fontaleoni’s Vernaccia di San Gimignano will all be in my glass this summer because there is no smoke and mirrors, only fresh natural flavors that quench the thirst, please the palate, and refresh the soul. And what would summer be like without an invigorating glass of Provençal rosé? Not a very good summer at all I think, so I will pour myself a glass of the 2021 Le Provençal Cotes de Provence Rosé while I fire up the grill. It will then be time to open a good red, cooled to about 60° F. California Zinfandel, Italian Primitivo, and a host of Mediterranean reds, cooled to 58-60° F, also make great summertime wines with almost anything that comes from the grill. Sequum’s Napa Valley Zinfandel from California and Masserie Pizari’s Salento Rosso Primitivo from Southern Italy will certainly be on my summertime wine list. What’s on your summertime wine list? Enjoy! 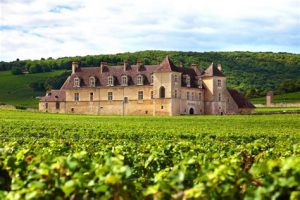 Burgundy is a wine as well as a place. In fact, it is many wines and many distinct locales, all of which were once part of the ancient duchy of Burgundy. Situated several hundred kilometers southwest of Paris, Burgundy is hallowed ground to serious lovers of the vine. From its golden hillsides, whose center slopes are so aptly named the Côte d’Or, flow France’s most expensive and profound wines. Names such as Romanée Conti, Chambertin, Clos de Vougeot, and Le Montrachet, among others, have been delighting serious wine aficionados for centuries. Yet, there is much more to Burgundy and its wines than a few illustrious names. For starters, Burgundy is the ancestral of home of two of the world’s most revered grape varieties – Pinot Noir and Chardonnay

Clearly, Burgundy is much more than a single wine or one great vineyard: it is a special place, a land almost entirely devoted to wine in one fashion or another. However, what remains surprising to many wine drinkers is that Burgundy is both red and white wine, the best of which come exclusively from Pinot Noir and Chardonnay, respectively. With a growing number of exceptions, the finest Burgundies emanate from the region’s hallowed core, the Côte d’Or, which begins on the fabled Côte de Nuits, just to the south of Dijon, and flows all the way south to Santenay at the tip of the Côte de Beaune. The Premier and Grand Cru wines from these illustrious hillsides are worth their weight in gold, but increasingly the wines from the gentle slopes outside the privileged climats are creating the most attention and providing great drinking pleasure, including those on the Côte Chalonnaise and in the Mâconnais south of the Côte d’Or – all Burgundy and increasingly worth their weight in gold. Salut! 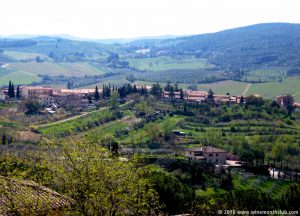 Montepulciano is one of the world’s great wine towns. Even when legions of wine-thirsty tourists descend upon the Tuscan hill town of Montepulciano, it manages to retain its charm and characteristic medieval feel. In fact, this bustling town is a strollers’ paradise, replete with flower bedecked alleyways and steep steps in place of streets. And thanks to a ban on vehicles in much of the old town, one comes to quickly understand how Montepulciano emerged a “Pearl of the 16th Century.” Set on a steep hill between the Val di Chiana and the Val d’Orcia, Montepulciano is the center of the thriving DOCG (Controlled and Guaranteed Denomination of Origin) of Vino Nobile di Montepulciano, one of the greatest and oldest names in Italian wine.

In order to be called Vino Nobile di Montepulciano, a wine must, also, be matured in wooden casks for at least two years, starting from the 1st of January following the harvest. After maturing for three years, Vino Nobile is entitled to be called “Riserva.” Prugnolo Gentile must always be the primary grape variety, but other traditional Tuscan varieties such as Malvasia Nero, Canaiolo Nero, Colorino, and Mammolo are also permitted. Small amounts of Merlot and Cabernet are now legal in Vino Nobile as well.

Châteauneuf-du-Pape sits astride the swift-moving Rhône River in the sun-drenched heart of Provence, known as the Vaucluse.  Blessed with a dry Mediterranean climate ideal for the cultivation of vines and the production of wine, this historic picturesque wine region fashions a vast array of the world’s greatest red wines, thanks in large part to the proliferation of old-vine Grenache.

In addition, the entire production of Châteauneuf-du-Pape is hand harvested.  Moreover, there is the region’s fabulous terroir – large, flat stones known as galets roulés that mingle with decomposed gravel.  These remnants of Alpine glaciers, which once covered southern France, form Châteauneuf-du-Pape’s glacial till.  This sacred till provides excellent drainage and imparts subtle nuances of flavor to the appellation’s outstanding wines.  However, many consumers are surprised that both red and white wines emanate from Chateauneuf-du-Pape, and that red Châteauneuf-du-Pape may contain all of the appellation’s thirteen legal grape varieties. 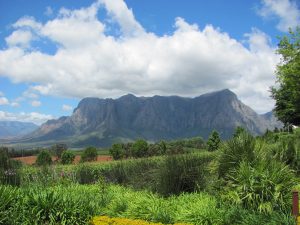 South Africa has had a thriving wine industry since the 17th century, but only now is the rest of the world taking notice.  Quality and innovation push the envelope and values abounds.  And nowhere in South Africa is their more to delight wine lovers than in the much heralded Winelands of Stellenbosch.

Located on the Western Cape less than an hour north of Cape Town, the picture post card town of Stellenbosch and the surrounding mountains form a dramatic backdrop for what has justly been heralded as the most beautiful wine country in the world.  Although some may try to refute that claim and promote the various picturesque merits of other world renowned wine regions, what is not in question is the integral role Stellenbosch has played for more than three centuries in the formation of South African wine.   Yes, the South African wine industry is that old; it dates back to the second half of the 17th century.  Not only is Stellenbosch  South Africa’s oldest and most important wine producing region, it is the finest region for red and white wines on the African continent.  It is South Africa’s Napa, Sonoma, and Santa Barbara counties and much more.  Stellenbosch contains a myriad of microclimates, which allows for the cultivation of a wide array of grape varieties.  Consequently, Stellenbosch is responsible for high quality red and white wines from a host of varietals that include Cabernet Sauvignon, Shiraz, Chardonnay, Chenin Blanc, Pinot Noir, Sauvignon Blanc, Semillon, Viognier, and of course South Africa’s unique varietal Pinotage, a cross between Pinot Noir and Cinsault.  From wineries in Stellenbosch old and new flow an enormous variety of wines that are world class and wholly unique in character.  It is time to discover the unique, incredibly flavorful wines of Stellenbosch – South Africa’s crown jewel and the world’s most beautiful wine land.