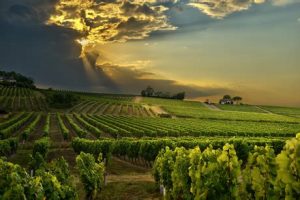 Languedoc is the source of many of the world’s greatest wine values, as the region continues to push the envelope in terms of both quality and value, and given the region’s propensity for fashioning bold, beautiful red wines, recently enacted tariffs on wines under 14% alcohol should have little effect on the region or American consumers’ pocketbooks. The region’s deeply colored reds are also full of antioxidants, which can boost our immune systems in these times of trouble.

For starters, Languedoc is the world’s largest single viticultural area, encompassing many appellations and distinctive sub-regions – all of which are capable of producing fine wine. This sprawling viticultural wonderland stretches all the way from the Spanish border in the southwest, within sight of the towering Pyrenees, to the banks of the Rhône River far to the northeast. Languedoc cuts a huge swath of dry coastal plain and sheltered mountains from which flow the guts and the glory of French viticulture.

The Languedoc, whose name is synonymous with the language of southern France, was the first part of ancient Gaul to be extensively planted to the vine. And long before Caesar’s Roman legions had subdued the Gallic tribes, wine was big business in Languedoc. The Phoenicians passed this way, and not surprisingly the region’s beauty and superb conditions for the cultivation of the vine did not escape the first Greek colonists who planted vines there, making Languedoc the cradle of French viticulture in the fifth century BCE. For nearly two thousand years, Languedoc remained the “big dog” and premier purveyor of wine to France and the world. However, the glory of France’s most historic wine region – the birthplace of troubadours and Provençal, the lyrical language of poetry – came to a screeching halt at end in the 19th century with the advent of phylloxera, the most dreaded of all vine diseases.

The Renaissance of Languedoc

Throughout the late 19th century and most of the early 20th century, the Languedoc languished, becoming the planet’s greatest source of bulk wine, known unceremoniously as vin ordinaire, plonk, and worse. It was not until the 1970s that Languedoc began the long march back to glory. With no longer a demand at home or abroad for cheap, coarse wines, the emphasis in Languedoc shifted back to quality rather than quantity. Many of the region’s oldest vineyards were restored, premium varietals replanted, and vines began moving back to ancient hillside sites to produce less wine of greater quality. The results have initiated a veritable Renaissance in the Languedoc, especially in the favored appellations of Fitou, Corbières, Minervois, and Pic St. Loup where choice hillside vineyards have produced fine wine for millennia.

Some of Languedoc’s best and most consistent producers include Gérard Bertrand, Gourgazaud, Mas de Daumas Gassac, Mont Tauch, and Sainte Eulalie, the latter known for their exceptional red wines from Livinière, a sub-appellation within Minervois, which appears to be slated to become Languedoc’s first Grand Cru.