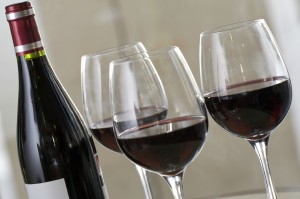 Carmenere may not be on the tip of everyone’s tongue, literally and figuratively, but for the life of me I don’t know why.  Granted not everyone likes the same kind of wine.  I get that.  People should drink what they like because no one can drink anyone else’s palate. Yet, the fact remains: I really love good Carmenere, the missing link of Bordeaux varietals that thrives now in Chile like it hasn’t in Bordeaux for well over a century, and I feel the need to spread the word.  Brought to Chile in the 19th century, before the advent of phylloxera, Chilean Carmenere was mistaken for a clone of Merlot until the 1980s.  It’s hard to believe that one of Bordeaux’s six legal red grape varietals could be misidentified for so long, but the truth is always stranger than fiction.  So, what do I like about Carmenere?  A lot!  First, any decent Carmenere will dazzle the eye because Carmenere yield’s the deepest purple of any grape varietal.  More intriguing is Carmenere’s luscious aroma and savory flavors: rich red fruit and blackberry scents and savors wed to hints of bell pepper, black pepper, dark chocolate and spice. And best of all, Carmenere’s tannins are smoother than those of Cabernet and its other Bordeaux compatriots, making it a pleasure to drink in its youth.  The older I get, the less I want to wait for wines to age.  Lastly, every time I bring a well-made Carmenere to a tasting, it’s a hit, among young and old.  People like it, especially after it’s had a few minutes to breathe.  I never judge a Carmenere on first sip; any good Carmenere will change a dozen times in the glass.  Better to give a good red wine a little time in the glass to collect itself, than have to wait years for it to be ready to drink.  For sure, Carmenere’s not for everyone, but if you haven’t tried one, I suggest you do.  You may find yourself singing its praises to.