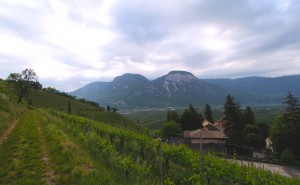 In some wine regions of the world, the quality of wine doesn’t vary tremendously from year to year.  The reason is that the weather in some wine areas remains fairly consistent and predictable.  In other wine lands such as Bordeaux, vintage means everything.  The weather in Bordeaux varies enormously throughout the growing season and from year to year, and because weather largely determines the quality of the vintage and the resulting wine, vintage speaks volumes in the most hallowed of French appellations.  The saying in Bordeaux is June makes the quantity, August the style, and September the quality.  If the flowering and subsequent berry set go well in June, growers can look forward to a bumper crop.  And by August, the vignerons know roughly what to expect in style.  But it’s September that ultimately determines how good the Bordeaux will be, particularly the reds, based largely on the amount and frequency of rain that falls during the month.  If a tropical depression sweeps in from the Atlantic, all bets will be off.  With this said, Bordeaux has enjoyed a bevy of fine vintages in recent years, and no two back to back vintages in memory rank higher than 2009 and 2010.  Although the resulting wines are different in style, each of these vintages enjoyed ideal weather in September and October.  The years 2009 and 2010 produced from top to bottom some of Bordeaux’s most drinkable and profound red wines.  Consequently, I’m putting as many 2009 and 2010 red Bordeaux in my cellar as I can afford because Bordeaux doesn’t get much better than in these two vintages.