The spread and crisps can be made ahead, so this appetizer comes together fairly quickly just before serving. Baking the won tons skins instead of frying them minimizes the amount of oil and keeps the crisps from curling up. The meaty tuna – lightened by the puree – pairs well with brut rosé sparkling wine and lighter-style Pinot Noir. 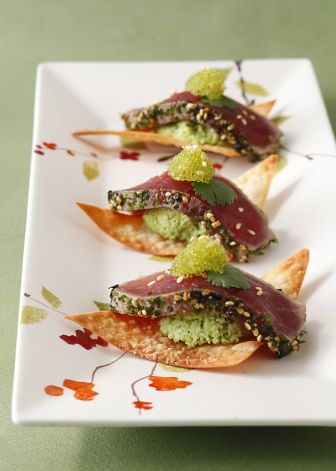 For the Edamame Spread:

Cook the frozen edamame according to package directions. Drain well. Add the garlic and vinegar to a food processor and pulse to combine. Add enough oil to make a fairly smooth, moderately thick paste. Season to taste with salt. Cover and refrigerate, but bring to room temperature before serving. The puree can be made 1 to 2 days ahead. Makes about 1 1/2 cups. Save leftovers for another use.

Preheat the oven to 375°. Cut a dozen won ton skins in half diagonally. You will have extra crisps, which are good to have on hand in case of breakage. Save the remaining won ton skins in the package for another use.

Place the won ton triangles on a rimmed baking sheet. Brush with oil or lightly coat with pan spray; sprinkle with salt. Bake until golden brown, about 6 minutes. Cool thoroughly, then place in an airtight container or plastic bag. These can be made a day ahead. Makes about 2 dozen.

About 2 hours before serving, season the tuna with salt and pepper to taste; roll all sides in the furikake, pressing it onto the tuna.

Heat a small nonstick skillet over medium-high heat; coat lightly with oil. Add the tuna and sear on all sides, about 10 seconds per side. Clean out the pan as needed between searing each side if any loose furikake flakes start to burn.

Remove the tuna from the skillet and place the tuna in the freezer to thoroughly chill and partially freeze, which makes it easier to slice evenly, about 45-60 minutes.

Remove the tuna from the freezer and slice it about 1/8 -inch thick. Spread about 1 1/2 teaspoons of the edamame mixture on each won ton crisp; top with a slice of tuna and a light sprinkle of salt, then garnish as desired.

Note: Packaged won ton skins are located near tofu in the refrigerator case of most markets. Furikake – a Japanese condiment – can be found in Japanese markets and some Asian grocers.

Recipe and photo from www.SFGate.com